The logging industry has historically been one of the world’s most dangerous work environments. With a fatality rate of 92 per 100,000 workers, logging was ranked as the 2nd most dangerous job by fatalities in 2010. There does exist systems which track the positioning of forestry heavy machines. However, no such attention has been given to the many individual foot workers that occupy a typical logging site.

To meet our design goals our team must satisfy the following: 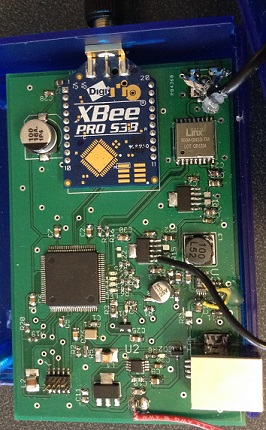 My contribution to this project included:

The system utilized hand soldered surface mount components with the exception of the wireless module which was through-hole.

There are two physical components to the personnel detection system: the Worker Location Device (WLD) and the Machine-Mounted Device (MMD). The internal hardware and layout of the WLD and the MMD are nearly identical. The main differences are that the WLD runs on battery power, and the MMD runs on USB power from the tablet computer. The MMD also speaks to the user interface via the GUI. The WLD is simply an on/off device. Block diagrams of each are shown below: 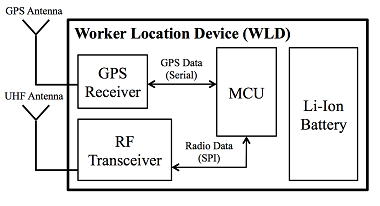 A battery is omitted from the MMD because it can draw power from the machine itself or the tablet computer via USB. The wireless transceivers supported mesh networking. This technology drastically increased the range and coverage of our system and radio dropouts where almost never observed. There are two methods of personnel detection: one primary, and one backup.

High-level function of our system's operation.

The application code that runs the GUI displays a map on which each worker's location is shown relative to the machine's location. The system GUI was made to ideally run on a touch screen tablet mounted inside the machine cab. Images of the GUI are shown below in states with the worker outside and inside the machines safety zone. 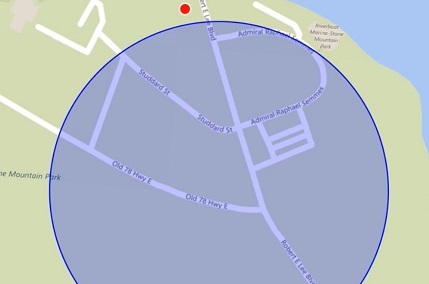 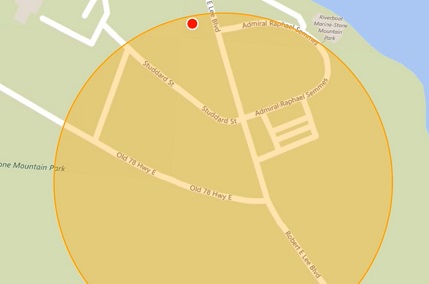 The application will also alert the worker when the backup system is tripped by a worker getting too close. An image of the visual alert is shown below. 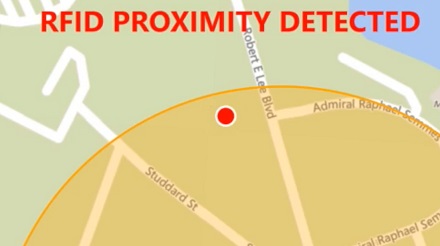 Upon completion of our project we had a working prototype that met all of our design requirements. The GUI software application is able to track workers in real time. The wireless range far surpasses our minimum requirements even in a forest environment. This was helped due to the use of mesh networking between the nodes. The backup method performed very reliably. Our GPS system worked well considering the dense canopy environment we did our testing in. However in some instances the update rate would decrease temporarily causing small accuracy fluctuations of up to 15 yards in the worst case. These fluctuations where temporary and the accuracy would usually stay within 5 yards of the true location. Coupled with the backup system these accuracy fluctuations where not severe enough to cause the device to not perform acceptably.

The current battery life of the system is 18 hours, far surpassing the eight hours required. In future iterations of the project an improved regulator circuit would be implemented to increase efficiency, sleep states of all components would be used to decrease power usage, and a smaller or cheaper battery would be used. The required runtime between charges would still be met, and the cost and weight would be significantly decreased. The size of the system must also be reduced. This can be done by incorporating the GPS antenna onto the primary printed circuit board and using a pick and place machine for manufacturing so the components could be more densely placed. A necessary feature that would be added in future work would be to include a very loud audible alert from the software application to alert the machine operator. Visual alerts alone are not enough to ensure a worker will notice when a dangerous situation is possible.

This project was developed for the Georgia Institute of Technology's Senior Design course. 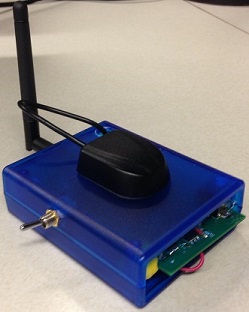 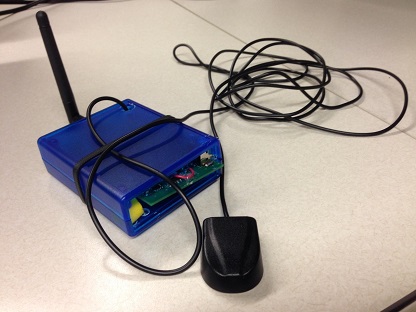